When might Google have its Microsoft moment? That is, when will it begin its inexorable decline – as most aging tech companies do when their growth stalls, and as Microsoft did – largely unbeknownst to (and even denied by) most observers? How might we know?

I have a few things I look for when thinking about inflection points in aging technology companies. Not all of these conditions need to be satisfied, but at least some of them do.

There are five major parts of the argument:

3. No longer hiring for innovation

One way of judging this to look at when Google’s stock stopped paying off for new employees. For the sake of argument, let’s say that’s when the company’s share price stopped appreciating in a meaningful way. You can see that for over a year now – the longest time in Google public history – it’s stock has flat-lined, after more than a decade of producing huge gains for employees. 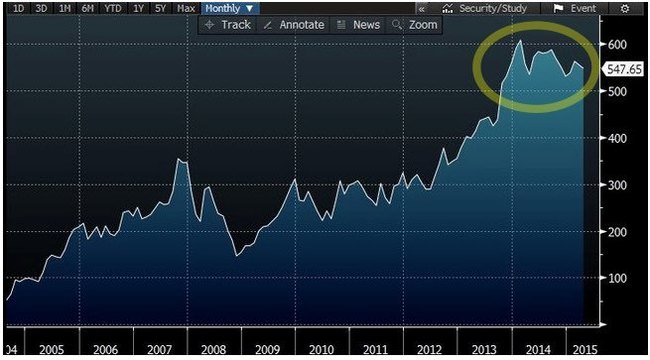 Something similar happened to Microsoft in 2001, and it was years before equity compensation there partially regained some allure. In the interim, many good employees left, whether because they had made their money and were done, or because they knew they wouldn’t in future. At the same time, Microsoft couldn’t use its equity currency as effectively any more to buy employees, which raised the cost and difficulty of hiring.

There is a twist here. Restricted stock units (RSUs, which Google calls GSUs – ick) are currently Google’s main variety of non-executive employee equity compensation,and they aren’t lottery tickets, like options. They are worth something at any combination of grant and post-vesting trading price. That means Google’s RSU grants are still worth something, no matter how poorly the stock performs.

Doesn’t the above mean that Google’s equity compensation, insofar as it’s now skewed to RSUs, is still highly valuable? Yes and no. Yes, because RSUs are, by definition (and unlike options), always worth something. But also No, because the payoffs, while more predictable, are also lower. And that has an effect, at least at the margin, in terms of the kinds of employees it attracts. More on this in 3) below.

Growth companies are magic things, right up until they aren’t. There is data out there showing that, with rare exceptions (like Apple), when a technology company slows down below 10% or so, it is rare to re-accelerate again. Investors notice, and they revalue accordingly.

The following graphic is from from a 2008 article in HBR. It looked at “stall points” in Fortune 100 and Global 100 companies during the period 1953 to 2006. Broadly, once stalled, a company stays stalled. Further, it, on average, loses 76% of its market value once investors realize the growth genie is gone.

When does a growth company cease being a growth company? When investor say it does, of course. But it’s worth noting when annual revenue growth rates fall back from historical levels to ones more in line with other technology companies deemed to be mature, like Microsoft.

As the following chart shows, that is roughly what has happened with Google. Its year-over-year revenue growth rate is now roughly in line with Microsoft, which is hardly the peer group to which Google would like to belong. 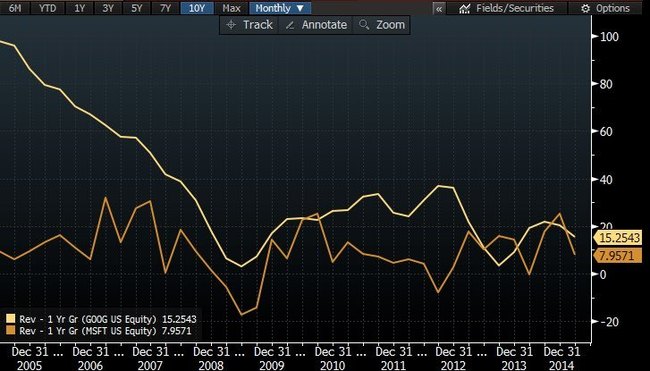 3) Hiring for risk management, not innovation

Something that happens in technology companies as they grow is they often stop innovating. That is, in part, because they’ve run out of ideas. but it’s also because they’re reluctant to hire innovators. Those people are a pain in the ass at any time, and more so than ever in large companies with many rules and procedures.

One indicator – and it’s far from definitive – is how well a company hires for innovation. While Google is rightly lauded for hiring smart engineers, and for having internal programs that encourage them to experiment and try new things, it’s not clear how well that is working anymore. The list of botched & abandoned Google projects grows ever-longer, and the list of business segments contributing meaningfully to revenue hasn’t changed much since inception. 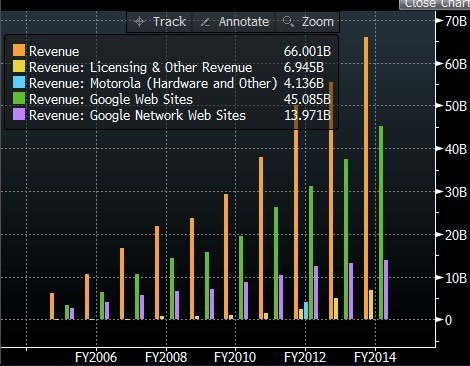 There is an interesting, related discussion on Quora about this subject. It is about the risk aversion in hiring at Google, and how that has affected innovation at the company, especially with respect to how many startups it produces.

Here is a year-old quote from that discussion, from venture investor and entrepreneur Keith Rabois:

“… after Google became successful, the type of candidate who applied and was hired shifted from the entrepreneurial to the smart yet homogeneous type. (Shift was pronounced by 2005.) As I have observed previously, only disruptive people create disruptive companies. (Stated differently, great entrepreneurs do not tolerate rules and constraints very well). Google has screened out personalities of this sort since at least 2004 and maybe since 2002.”

This has been going on for some time, of course, and it has hardly destroyed the company. It is, however, another data point worth considering. After all something similar happened at Microsoft in the late-1990s, ably chronicled after the fact by sites like Mini MSFT in posts like this one about stacked ranking.

It is worth pointing out here that Google continues to spend aggressively on R&D, as the following graphic of R&D as a percent of sales show. It has hardly ceded the innovation field, at least speaking from the point of view of research expenditures. 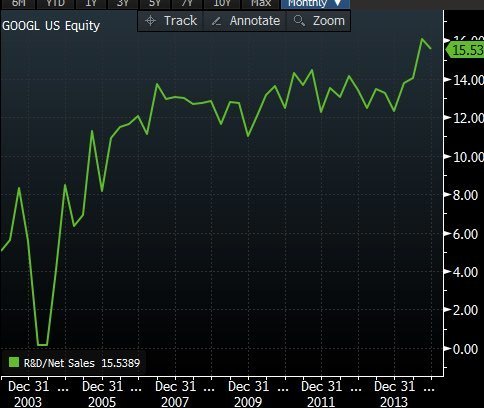 Then again, Microsoft’s R&D as % of sales peaked in 2004, just before it finally became obvious it was no longer a growth company. Its share price then flat-lined for most of the 2000s.

When technology companies cease to innovate, and face increasingly competitive pressure in their core business, it is inevitable margins come under pressure. We saw that happen with Microsoft more than a decade ago, and we see it to some degree now at Google. The advertising business is increasingly moving away from the desktop, where Google has a de facto monopoly built around search, to mobile and apps, where Google is just one of many (even if its Android is formidable).

We can see some of what that has caused in the following graph of Google’s operating margin over the last decade. It’s hardly collapsed, but it isn’t expanding either – it’s fallen significantly from its low-30s peak of the 2000s. 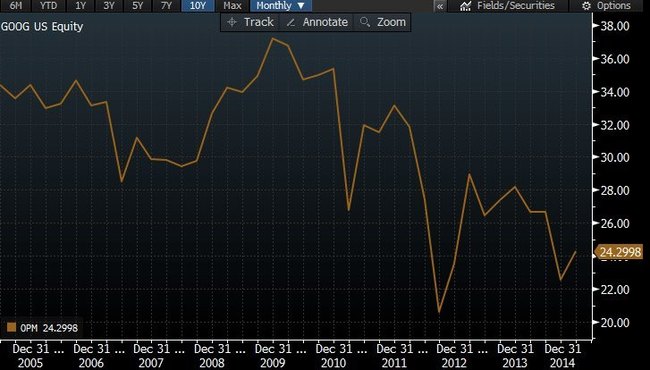 IBM and, later, Microsoft, responded to this margin pressure by moving into services and enterprise business. You can expect Google, a highly consumer-centric company, to increasingly do the same. Of course, like Microsoft and IBM, it may provide a floor for margins, but, as history shows, it almost certainly won’t turn the company back into a growth firm again.

There is nothing that spoils a good growth story party for a quasi-monopolist quite like antitrust action. Rather than revenue growing, it is the headcount of in-house lawyers that grows, as does risk aversion and commensurate wariness about acquisitions.

People will have forgotten, but Microsoft’s adventures in antitrust began in March of 1998, and was decided in June of 2001. Microsoft was never really the same afterwards, with it increasingly obvious that it was nervous about looking aggressive in its markets, as well as about doing any sort of large acquisitions. As a result, a generation of companies could thrive relatively unimpeded, like Google, Apple, VMware, and others. By the time Microsoft got more aggressive again, years later, its growth mojo was long lost.

Something similar is arguably beginning to happen at Google. It faces antitrust action in the EU, which could presage more action in the U.S. While it hasn’t stopped the company in its tracks, as eventually happened with Microsoft, it is almost certainly a new factor in the company’s decision-making. We can’t know how Google’s legal staff has expanded, or how big it is, but it has become the largest lobbyist among technology firms, and its current legal requisitions aren’t just business process related.

It’s worth considering that we are at some sort of inflection point in Google’s business. Is it a “Microsoft Moment”? I have no idea. The parallels are there, even if they aren’t and could never be 1:1. Nevertheless, it’s at least interesting the pressures on Google.

Of course, if and when it’s all clear, it’s too late. Like many things in economic life, decline happens at first slowly, and then all at once – and is usually missed until it’s already happened, and then, of course, it is declared obvious.

I’ve been messing about with our Raspberry Pi 2 here in recent weeks. My first project was an SSH honeypot, built around the open-source honeypot kippo. I’ll post something on it in the next week or so. It was … entertaining. The second,... Continue →