Music and Innovation and Teams

The following tweet after the Grammy music awards got me thinking:

Granted, I know zero about music. And I know even less about the Grammys. But the idea that albums up for record of the year had such dramatic differences in the number of people behind them was striking.

Leaving aside the sniping about whether larger producer/writing teams is somehow discrediting – some argued that Beck was a more legitimate winner because he was the auteur, unlike with Beyoncé – I was curious whether this was new. Innovation has become a team activity in many areas of economic and artistic life, so is that also the case with music?

I decided to look at the annual list of top-selling albums back to the 1960s. How many writers & producers were behind them? Sadly, it wasn’t easy to find how many songwriters were involved, but it was fairly straightforward to scrape Wikipedia data on the number of producers.1

Here is a graph of producers per bestselling album back to the 1960s. It’s a bit messy, so I’ve added a five-year rolling average as well.2 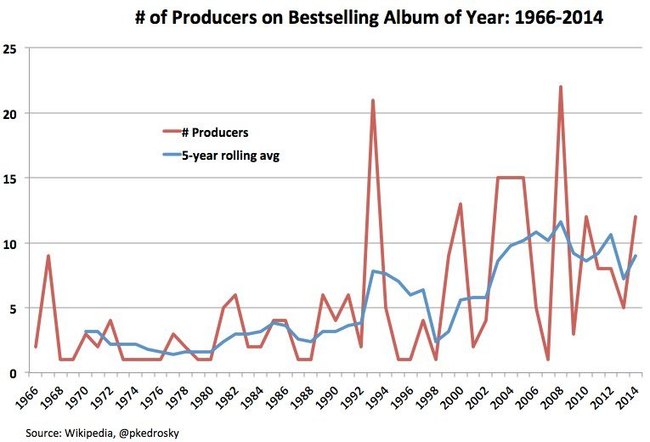 The number of producing credits per bestselling album has roughly tripled over the last four decades. Granted, some of that may just be compensating for undercounting in the past (see footnote 1 below), and some seems also to be an artifact of the way producing credits are handed out like bon-bons on rap records, but it’s still intriguing. At least superficially it suggests that music, like so many innovative activities, is becoming increasingly a group exercise, even at the highest levels of achievement3.

April 7, 2015 When might Google have its Microsoft moment? That is, when will it begin its inexorable decline – as most aging tech companies do when their growth stalls, and as Microsoft did – largely unbeknownst to (and even denied by)... Continue →